Project Health Solutions
Home Active Solutions What to eat after a workout to lose weight, build muscle, and... 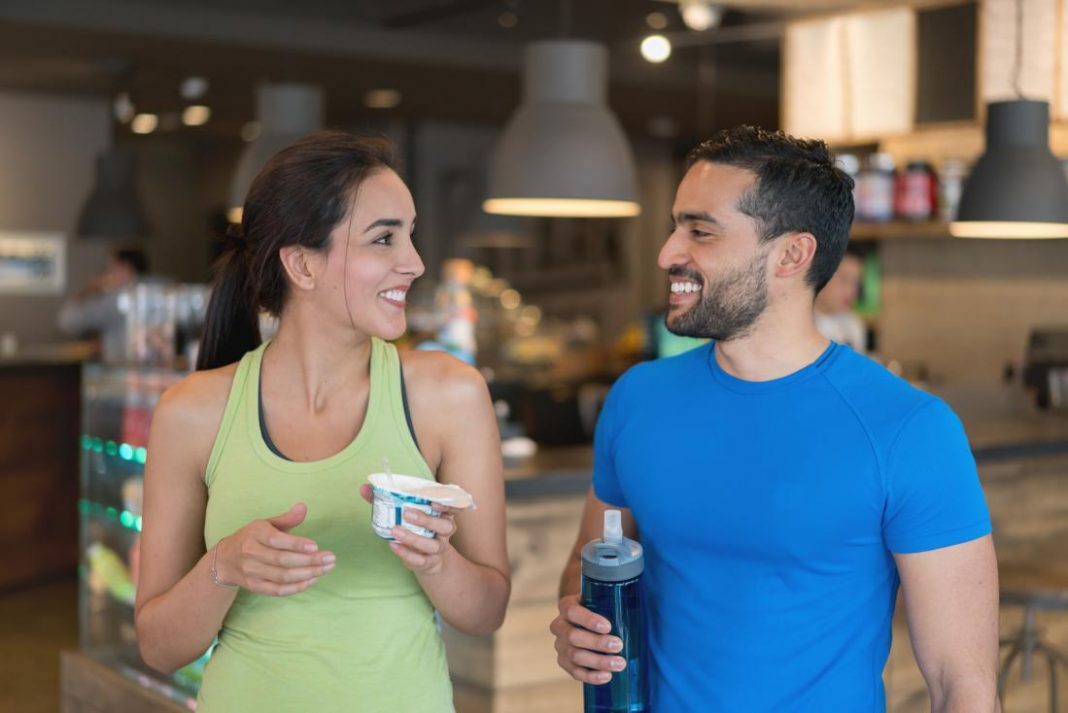 Physical activity uses a lot of energy. It is difficult for the body to recover if energy levels are not replenished within 15 to 30 minutes after finishing a workout. Eating even a little snack shortly after exercising can help to restore energy levels.

According to research published in 2017, as few as 9 grams (g) of milk protein may be enough to stimulate protein synthesis in the muscles, aiding in recovery after exercise.

Other than milk, dairy products rich in protein include:

In fact, a 1 cup serving of low-fat kefir contains 9.2 g of high-quality protein. These proteins can repair new cells, especially those in the muscles. These proteins also contain all of the essential amino acids, which are only available through the diet.

The researchers concluded that while both milk and soy proteins help a person to maintain and build muscle mass, milk proteins were more effective at supporting the quick growth of lean muscle mass.

Results of a study from 2017 suggested that consuming whole eggs after resistance exercise resulted in more protein synthesis than consuming egg whites with the same protein content.

The researchers concluded that the nutrients in the yolk helped to stimulate the muscles more effectively.

Research from the Washington University School of Medicine suggests that supplementation with omega-3 fatty acids helps to boost the synthesis of muscle proteins and increase the size of muscle cells in healthy young and middle-aged adults.

Fatty fish, including salmon, are rich in omega-3 fatty acids. Tuna also contains high levels of the fatty acids, and about 6 ounces (oz) of tuna packed in water contains 41.6 g of protein and 5.4 g of fat.

Other evidence shows that oil drawn from fatty fish may help to reduce muscle soreness after resistance training. A study from 2016 found that consuming 6 g of fish oil every day for 1 week before beginning resistance exercise resulted in reduced muscle soreness.

Consuming carbohydrate-rich foods may be the best way to reduce the decreases in immunity that can occur after exercise.

Sweet potatoes, grains, and fruits can contain high levels of healthful carbohydrates, as can quinoa.

Quinoa is gluten-free, classified as a pseudocereal, and usually consumed as a grain. It is high in fiber and rich in protein, with 1 cup providing 8.14 g.

Also, quinoa has a low glycemic index, making it an excellent choice for people who regulate their blood sugar.

The nutrients and chemical compounds in herbal teas, especially yerba mate, may help the body process carbohydrates and protein effectively.

Authors of a study from 2016 compared the effects of yerba mate to water after exercise. The participants who drank yerba mate recovered strength faster in the 24 hours that followed a workout.

In 2012, researchers found that mice administered yerba mate extract were able to metabolize more quickly and expend more energy than those who did not.

It is essential to drink plenty of water before, during, and after a workout. Staying hydrated ensures that the body gets the most benefit from exercise.

The body loses water and electrolytes while sweating, so drinking water during and after a workout promotes performance and recovery.

Everybody varies in the amount of water they need, depending on the type of exercise, how much they sweat, how thirsty they are, as well as other factors.

During exercise, the muscles use up stored glucose, called glycogen, and levels become depleted.

Endurance sports, such as running, use up more glycogen than resistance activities, such as weightlifting. Another effect of exercise is that the muscles develop small tears.

Getting the right nutritional balance after exercise restores energy levels and reduces fatigue, helping the body to repair muscles and build strength for future workouts.

Proteins, carbohydrates, and healthful fats are all essential for the body’s recovery.

Exercise supports muscle growth, but the body can only build upon existing muscles if they recover after each workout.

Consuming protein after exercise helps the muscles to heal and prevents the loss of lean mass. Lean mass contributes to a muscular and toned appearance.

Carbohydrates are macronutrients that help the body to recharge and restore its fuel supply.

Anyone who exercises more than seven times a week should consume plenty of carbohydrates, as they quickly replenish glycogen levels.

Many people believe that consuming fat after exercising slows digestion and the absorption of nutrients. For some types of fat, this may be true.

However, there is little information about the post-workout effects of fat calories. It may be a good idea to limit fat intake after exercise, but low levels of fat are unlikely to inhibit recovery.