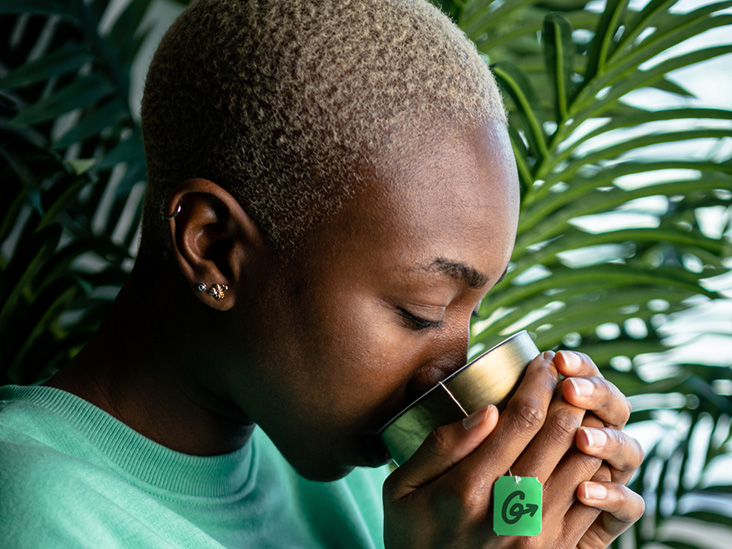 Many teas contain herbal ingredients that have long been used to help people relax. Here’s the science behind it, along with the best teas to ease anxiety and stress.

Sometimes the ritual of a cup of tea is enough to calm your nerves, but there are some types of tea that go the extra mile to soothe anxiety. We’ve rounded up the top ten anxiety-banishing teas for you. We’ll break down the possible herbal ingredients and health benefits of each, so you can choose the best one to bring the calm you need.

There are several ways drinking a cup of tea could lessen your anxiety.

Many teas contain herbal ingredients that have long been used to help people relax. We will get into the science behind some of those ingredients below.

Even the simple process of brewing tea can be calming. If you treat it like a mindful ritual, it can give you a moment to pause.

Start the kettle boiling, choose a mug that feels nice in your hands. Select a tea bag and inhale. While your tea steeps, sit down for a moment. Take deep breaths over the steamy cup. Make it sweet or creamy, spicy or strong, however you like it. Sip and simmer down.

Tea may also help lower anxiety thanks to good ol’ aromatherapy. Before you sip and throughout your tea experience, you are inhaling the aroma of your tea. As you’ll see from our top 10 list, many of these teas are scent-ual favorites, like peppermint, rose, and lavender.

If you’re looking to try anti-anxiety tea, here are the 10 best options, along with what research says about their impact. Let’s get brewing!

There’s evidence that peppermint was used for medicinal purposes in ancient Greece, Rome, and Egypt. It’s no wonder it’s still a popular remedy for stomach ailments, headaches, and stress.

Even though there’s a long tradition of using peppermint, there’s actually not much research. It seems to be safe, but there’s also no research on the long-term effects of ingesting a lot of peppermint.

One 2019 study looked at the effect of inhaling peppermint essence on patients receiving an intravenous catheter. The study inhaling peppermint scent significantly lowered pain and anxiety during the procedure. Researchers theorize that aromatherapy stimulates the nervous system to increase endorphins and lower cortisol.

Every chill granny knows a little chamomile tea is the soothing secret to turning down. Studies suggest chamomile tea could help with generalized anxiety disorder. The small amounts used in tea are expected to be safe, but people who take certain drugs like warfarin or cyclosporine should be aware of potential interactions.

A recent study conducted with mice found that chamomile had a sedative and anti-anxiety effect. In another study of 93 people with moderate to severe generalized anxiety disorder (GAD), participants were given pharmaceutical grade chamomile extract for 12 weeks. In a second 26-week phase of the study, they were given chamomile or placebo. Chamomile significantly lowered GAD symptoms with low adverse events.

Scientists believe apigenin, a flavonoid in chamomile, may have anti-anxiety effects. However, studies on its effects on sleep and its safety are small and limited.

From baby lotions to lattes, lavender has a widespread reputation for soothing nerves. According to one systematic review of 90 studies, lavender inhalation significantly reduces anxiety. Taking lavender orally or through massage was also found effective at reducing anxiety. However, the researchers of this review acknowledge the quality of studies available is low and at risk for bias.

In a 2021 study, lavender reduced anxiety better than placebo or no treatment, and lowered blood pressure. However, results showing an effect on physiological symptoms were small and inconsistent.

Lemon balm, or Melissa officinalis, has been used medicinally for over 2000 years. In a 2020 study of mice, scientists found that lemon balm had anti-anxiety and anti-depressive properties, and showed signs of preventing oxidative stress and cell death.

Indigenous Americans traditionally used passionflower as a sedative. It is now promoted for anxiety, sleep, pain, menopause symptoms, and attention deficit hyperactivity disorder (ADHD). Passionflower has not been extensively studied, but there’s some indication it could reduce anxiety before surgery and dental procedures.

In a 2017 study, 40 patients were given oral doses of passionflower or midazolam before having a tooth pulled. Anti-anxiety effects were similar for both substances. In a 2020 review of 9 clinical trials, the majority of results showed passionflower reduced anxiety symptoms without adverse effects.

Passionflower should not be used during pregnancy. It is safe in doses up to 800 mg daily but may cause side effects like sleepiness, confusion, and uncoordinated movement.

Green tea is no secret. Its health benefits have been examined thoroughly. But there may be a secret when it comes to green tea and anxiety – cut the caffeine.

In 2017, two studies looked at the impact of green tea with less caffeine. In one, scientists suggest that theanine, an amino acid in green tea, lowers stress but the effect is blocked by caffeine. In a small study, 20 students were given green tea with lower caffeine. Stress symptoms were lower in the test group and their stress response was suppressed compared to the placebo group.

In another small study of 20 middle-aged adults, stress markers were lower in the group who drank reduced-caffeine tea compared to regular green tea. Also the low-caffeine green tea group had better sleep quality and less fatigue.

A member of the ginger family, turmeric has a long history in traditional medicine. The colorful rhizome (root) is used as a spice for cooking and as an herbal medicine.

Turmeric’s healing properties lie in the fact that it is the major source of the polyphenol curcumin, which is both antioxidant and anti-inflammatory.

Sipping on turmeric tea or a turmeric latte is one way to reap the benefits. You’ll often see turmeric combined with black pepper, which increases bioavailability of curcumin.

So what does the science say? In one study of 30 participants, a curcumin supplement decreased anxiety.

In another study, researchers say a dietary deficiency of DHA linked to anxiety, and curcumin promotes production of DHA. They demonstrated this by showing curcumin reduced anxiety behaviors in rodents.

Valerian was used in early Greece and Rome to treat insomnia, migraine, and fatigue. There’s not much research and inconsistent evidence about whether it helps with sleep. Also, there’s not enough evidence to conclude whether it helps with anxiety or stress. So using valerian to relax is mostly based on tradition and vibes, but it’s generally safe for short-term use.

A 2021 review of research shows some promise for valerian root. Scientists reviewed research on 23 medicinal plants for treating anxiety. More research is needed, they say, but valerian was one of three plants found to have the most potential. Researchers said valerian combined with hops and passionflower produced the best results in the studies they reviewed.

Smells sweet, looks pretty, but does it have any effect on anxiety? Researchers reviewed 13 clinical trials of rose oil with 772 participants. The studies used inhalation and topical methods, and rose oil was found useful for physical and psychological relaxation, pain reduction, and anti-anxiety.

Ginseng preparations are usually made from the plant’s root. Unfortunately, studies on its use are generally too low quality to be conclusive. Another thing to consider – insomnia is the most common side effect of ginseng, and that’s not great for anxiety. Ginseng is not safe in pregnancy as components have caused birth defects in animals.

So why does it make the list, you ask? Well, with all those caveats, we still found a few nuggets of research on the topic. In a small study of 38 patients with fibromyalgia, the group that took ginseng had lower pain, improved fatigue, better sleep, and reduced anxiety after 12 weeks of treatment. Another study showed ginseng seems to help with anxiety and stress-related physiological diseases and inflammatory diseases. Researchers back it as an adaptogen that promotes homeostasis in response to stress.