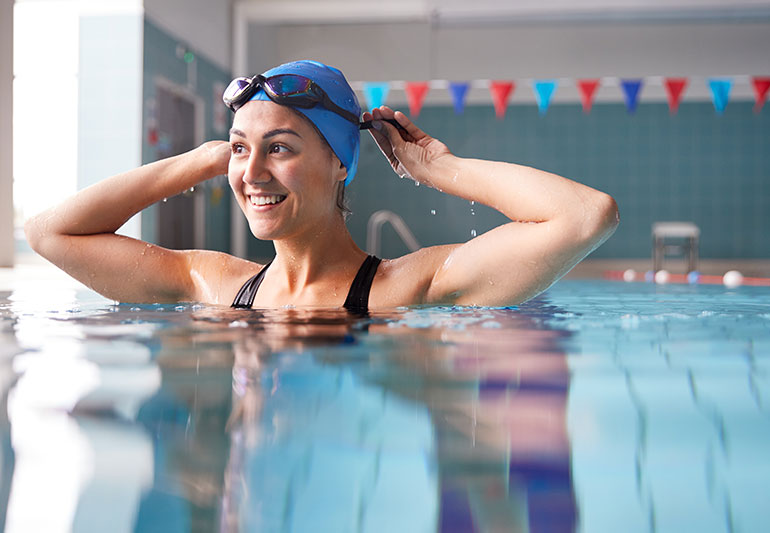 Regular physical activity is an important part of a healthy lifestyle. Not only is it good for your muscles and bones, it can keep your brain healthy, too. Read more below!

You’ve taken to the heart recommendations to get at least 150 minutes of moderate-intensity aerobic physical activity a week to improve your physical fitness.

Or … maybe you haven’t, but you’re looking for another reason to add more movement to your days.

What you might not realize is that with every step you take, every mile you pedal or every lap you swim, you’re enhancing your cognitive fitness. Yes. That’s right. Moving your body can help your brain work better. (Does that blow your mind or what?!)

“We know that physical exercise, and aerobic exercise in particular, is very beneficial for maintaining brain health, even in people who are at risk for developing dementia and Alzheimer’s disease,” says neuropsychologist Aaron Bonner-Jackson, PhD. “With regular exercise, you can make a major difference in terms of how your body is functioning and, as a result, how your brain is functioning.”

We talked with Dr. Bonner-Jackson and physical therapist Christy Ross, PT, DPT, about how exercise boosts your brain health, and how much exercise you need.

The science of exercise and brain health

In a recent study, 454 older adults underwent yearly physical exams and cognitive tests for 20 years and agreed to donate their brains for research when they died. The participants were given accelerometers, which tracked their movement and physical activity around the clock.

Those who moved more scored better on memory and thinking tests. And increases in physical activity were associated with a 31% lower risk of dementia, the researchers reported. The association between physical activity and brain function remained consistent even after the study’s authors accounted for the participants’ brain pathology and whether or not they had dementia.

In another study, 160 sedentary older people with mild cognitive impairment were assigned to take part in several options. They could do aerobic exercise (three times a week for 45 minutes per session), eat a heart-healthy Dietary Approaches to Stop Hypertension (DASH) diet, combine aerobic exercise with the DASH diet or receive health education.

During the six-month study, those who followed the DASH diet alone didn’t improve on assessments of executive function (which is responsible for tasks like planning, problem-solving and multitasking). And the health-education group’s brain function worsened, according to the study.

Those who exercised showed improvements in thinking and memory, and those who combined exercise and the DASH diet improved even more, the researchers reported.

How your brain benefits from exercise

“There are a lot of potential mechanisms of exercise that may be combining to benefit brain health,” Dr. Bonner-Jackson says. “In general, even in people who are at risk for development of Alzheimer’s or other dementias, can stave off decline in some cases for many years and help people function better.”

Physical activity may benefit your brain in a number of ways, each of which, in turn, helps your brain to retain memory and optimal functioning:

Exercise may provide physical benefits to your brain itself, too. Exercising can increase the thickness of your cerebral cortex and improve the integrity of your white matter (the nerve fibers that connect areas of the brain’s nerve-cell-rich gray matter). Exercise also promotes neuroplasticity, which is your brain’s ability to form new neural connections — in other words, your ability to learn throughout your life.

“One of the key places these changes take place is in the hippocampus, which is a very important area of the brain for memory,” Dr. Ross explains. “In studies of the brain, they find that people who get recommended amounts of exercise see some improvement in their hippocampus, which helps improve learning and memory.”

How much exercise do you need for your brain health?

Aerobic exercises are the ones to focus on here. That’s activities like running, jogging, biking, swimming or even dancing. Exercises that get your heart rate up are the best for your brain.

For most people, the goal of physical exercise should be to engage in vigorous physical activity three days per week for 15 minutes. Or, if high-intensity workouts don’t work for you because of health concerns or other reasons, you can aim for 30 minutes of moderate activity five days per week to get similar brain-boosting effects, Dr. Ross notes.

How can you gauge the intensity of your workout?

“When you’re working out at moderate intensity, that’s working out to the point where you’d be able to talk but not sing during your workout. When we’re talking high-intensity effort, that’s the point that you’re exerting yourself such that you’re not able to say more than a few words without pausing for a breath,” Dr. Ross explains.

She adds that a lifetime of regular exercise is best for optimal brain health, but it’s never too late to start.

“Even that person that thinks that they have been the most sedentary person or who maybe doesn’t enjoy exercise, there are still health benefits for your body and your brain by starting an exercise routine,” Dr. Ross continues. “Anybody at any age can get the benefits from adding exercise into their life.”

Every little bit of extra activity you can get can be beneficial. In one recent study, researchers concluded that even among people who didn’t meet the activity guidelines, each hour of light-intensity physical activity and achieving 7,500 steps or more daily was associated with higher total brain volume. This was “equivalent to approximately 1.4 to 2.2 years less brain aging.”

Talk with a healthcare provider if you need some tips to get started on an exercise program that will most benefit your body and brain.